Oscars 2017: The Thing About 'La La Land' and the Increasing Irrelevance of Award Shows 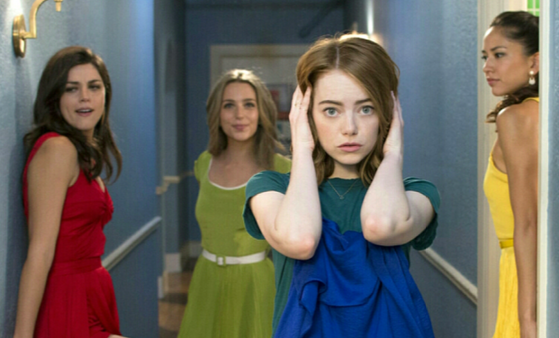 I admit: when I caught La La Land three months ago with a handful of people while it was playing in two theaters in L.A. (four in the entire country when you count New York City), I was blown away by its ambitious opening number that takes place on a traffic-clogged freeway ramp overlooking the epic expanse of the City of Angels. I was in genuine awe. I smiled for four straight minutes.

Shortly after walking out of the theater and processing what I had just witnessed, I immediately had a thought: the love and adoration for this film is going to catch on quick...just as fast as its inevitable backlash. And the more I learned about the complaints and criticisms surrounding Damien Chazelle's romantic ode to Hollywood musicals (Stars who can't sing! White guy saves jazz!), the more I understood where they were coming from. Some of the luster wore off, especially when compared to the devastatingly gorgeous Moonlight, a film that ultimately received the well-deserved Oscar for Best Picture during the shitstorm that was Sunday night's final award announcement.

First, let's get my own critique out of the way. The nutshell: I enjoyed La La Land. It opened with a strong, breathtaking promise of a good time and ended with a devastatingly gorgeous finale. (Points for the original music.) As for the middle? It came off more like a generic indie drama that didn't entirely click.

This year's Best Picture nominee list is a particularly frustrating one since most of them are a burden for average moviegoers. A domestic drama mostly set in a 1960s tenement with heavy dialogue? A depressing drama set in frigid New England with even more frigid accents? A paint-by-numbers war movie about a righteous soldier who doesn't believe in fighting?

We already have a divide in America, which was aggravated by last November's election. And that divide can also be felt when applied to which movie you're rooting for at the Oscars. What it basically comes down to are these titles: La La Land or Moonlight?

Team La La Land can argue that the current American zeitgeist needs an unabashedly romantic film about hopes and dreams. These are also the individuals who may have been on the early bandwagon, embracing its old-fashioned-ness. You might as well make hats campaigning for this film that say "Make movies great again."

As for Team Moonlight and the naysayers, most of them also have disdain for awards shows in general and don't wish to feel pressured into liking what the status quo shoves down their throats during this time of year. This says something about how the general public is now reacting to award contenders. They've already made up their minds about what should win. They don't take into consideration what the "elite" press says about the nominees. Or they just don't care.

Amanda Petrusich's brilliant New Yorker piece on the Grammys discusses the state of awards shows in general, especially in the age of social media, digital echo chambers, and stuffy traditions that refuse to adapt to an evolved culture. An excerpt:

Is this—viral currency, some event or song or shtick that somehow permeates every membrane—the new rubric for figuring out what we mean by “best”? The days of omniscient, authoritative proclamations of quality seem to be largely behind us. No matter what it is you’re into, it’s terrifyingly easy to find others to validate and echo your desires. These days, “good taste” seems like a silly and old-fashioned idea. All taste is good taste; the heart wants what it wants; everything is permissible so long as it is inclusive. So who needs an organization like the...Academy to issue decrees from on high? In a speech at around the three-and-a-half-hour mark, the Academy president, Neil Portnow, said, “What we need so desperately are more reminders of all that binds us together.” Golden trinkets, at least, still do not seem to be this thing.

In other words, since we live in an age in which we've created our own personalized digital echo chambers, do awards even matter anymore when most of us have become armchair critics with voices that get amplified across every Facebook post and tweet?

That all said, after watching the below "Actors on Actors" interview from Variety three months later, it's clear there had been an expectation for Molly Shannon to receive well-deserved award (if not Oscar) attention for her outstanding performance in the FANTASTIC YET CRIMINALLY UNDERRATED Other People, a movie I've praised over and over like a broken record.

And with hardly any attention paid, it's now sad to realize that "one of the best films of 2016" (my quote) probably didn't have the "Oscar campaign budget" and subsequent PR support to flash itself all over town screaming, "Look at me! I'm a good movie!" not unlike a certain, spotlight-hogging frontrunner.