Pop Culture Read of the Week: Being Woke in 2017 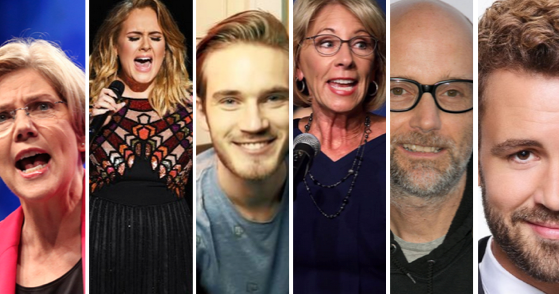 A few brief thoughts on these past two weeks...

We are not putting up with this shit. We see right through you. We know what's going on. We will not be distracted by bait. Our eyes are open. Our ears are listening.

First of all, ELIZABETH WARREN will not be silenced. And Jeff Sessions will be unmasked for the corrupt bigot he is:


We know THE BACHELOR's tears are fake as shit. Dude, don't cry because you have to send three women home. You still got a bevy of babes to take advantage of with your flaming douchebaggery.

Donnie, watching your CABINET assemble is like watching an origin story -- not of a band of superheroes but of team of supervillains. This group is overflowing with greed, ignorance, and deafening hypocrisy. All I see is a bunch of overprivileged white folks sitting on top of piles of cash, smoking cigars, and laughing maniacally into the air...Air that's been made more toxic thanks to their climate change denials and defunding of any efforts to save this sick planet.

If you're still arguing about how Beyonce's Lemonade should've won the GRAMMY FOR ALBUM OF THE YEAR, I urge you to read Amanda Petrusich's New Yorker piece on the state of awards shows in the age of social media, digital echo chambers, and stuffy traditions that refuse to adapt to an evolved culture. An excerpt:

Is this—viral currency, some event or song or shtick that somehow permeates every membrane—the new rubric for figuring out what we mean by “best”? The days of omniscient, authoritative proclamations of quality seem to be largely behind us. No matter what it is you’re into, it’s terrifyingly easy to find others to validate and echo your desires. These days, “good taste” seems like a silly and old-fashioned idea. All taste is good taste; the heart wants what it wants; everything is permissible so long as it is inclusive. So who needs an organization like the Recording Academy to issue decrees from on high? In a speech at around the three-and-a-half-hour mark, the Academy president, Neil Portnow, said, “What we need so desperately are more reminders of all that binds us together.” Golden trinkets, at least, still do not seem to be this thing.

BETSY DEVOS, how does it feel to further contribute to the downfall of American civilization by robbing children of their future education? Not only is your privilege showing -- it's poised to suffocate the millions of people who will be affected by your lack of experience and your mind-blowing ignorance.

We now live in a world where an electronic DJ is supposedly harboring secret intel on the POTUS's involvement with a foreign adversary (See: MOBY AND RUSSIA).

To the body-shaming trolls who tore into LADY GAGA during the Super Bowl's Halftime Show (which she slayed): May your blow-up dolls turn sentient and exact revenge on you.

YouTube megastar PEWDIEPIE got the boot from Disney's Maker Studios for making anti-Semitic jokes in his latest video. Next thing you know, Steve Bannon will be recruiting him to run Breitbart.

And to the "FRIEND" ON FACEBOOK who insists on posts painting Trump in a good light, your false equivalencies are some of the most ridiculous pieces of bullshit I've seen on social media.