On the Mass Shooting in Las Vegas 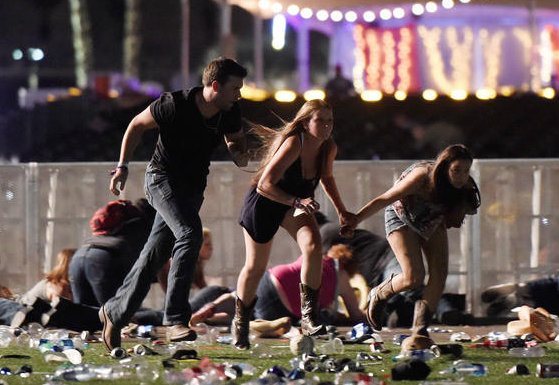 When someone says "prayers aren't enough" during a horrific tragedy like this, please don't construe this as an attack on religion.

Of course, thinking about the victims and their families -- having that moment of sympathy -- is natural. It's human. You can certainly keep them in your thoughts, and if you refer to those thoughts as "prayers," then so be it. But then take a moment to realize that won't be enough. Because a "prayer" is a conditioned, Puritanical response that was created hundreds of years ago to deal with horror in this country.

Next up: ask yourself why this country has such a long, drawn-out, unhealthy, codependent love affair with guns.

Is it because a bunch of men said it was our "right" hundreds of years ago, sealing the deal on a piece of parchment that was written to protect our ancestors from invaders?

Is it because that law has been ingrained into our minds -- embedded in our culture -- so much that it has transformed into a warped and dangerous sense of entitlement?

Is it because we have a government that has devolved to the point where it ultimately doesn't care about the physical and mental well-being of its citizens, therefore leading to more people taking matters into their own hands, therefore leading to more people suffering at the hands of those who react violently, victims themselves of a corrupt power?

Is it because we constantly seek thrills on the big screen, month after month, year after year, numbing ourselves while watching an indestructible hero blast bad guys with an obscene arsenal, igniting our own fantasies in which we blow away our enemies?

Is it because we don't know how to process negative feelings because we've created a culture that has failed to teach us how to properly process them, and as a result, has trapped us in a vicious cycle?

Is it because we've reached the point of no return?

Ask yourself all of this. And then ask it again. Because we know the opportunity to ask these questions will sadly present itself again.