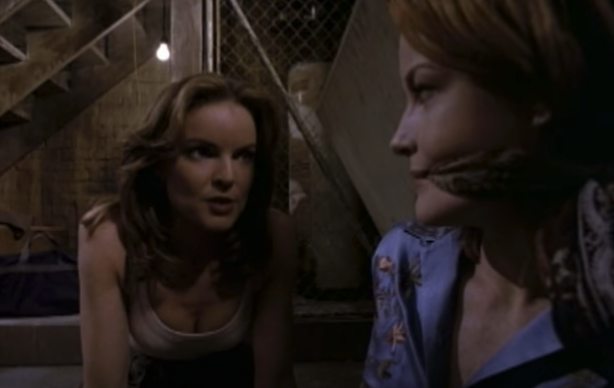 On May 22, 1995, Fox's Melrose Place ended its third season with one of the biggest cliffhangers of the decade -- and one of the most memorable in TV history. It was a delicious convergence of storylines that cemented the prime-time soap's legendary status in pop culture.

After two seasons of being betrayed, bothered, and bitchslapped, Dr. Kimberly Shaw (the marvelously wicked Marcia Cross, nearly a decade before she became one of the Desperate Housewives) had plenty of reasons to hate just about everyone who resided at the titular poolside apartment complex. She hated Michael for driving drunk and getting her into the car accident that ruined her life. She hated Matt for helping Michael hide damning evidence against him and for literally snatching her wig. She hated Sydney, Michael's former sister-in-law, for sleeping with him. She hated Jane, Michael's ex-wife, after Kimberly's plan to frame her for Michael's hit-and-run backfired. She hated Amanda for nearly stealing Michael and completely stealing Peter's attention away from her. And she hated Jo because she gave birth to the baby Kimberly could never have, which subsequently led to Kimberly kidnapping and breastfeeding said infant The-Hand-That-Rocks-The-Cradle-style. (And if you don't get that early-90s reference, then please do your psychological thriller homework.) Everyone else in the building was just collateral damage.

So what's a gal to do with all of that rage while being haunted by visions of her dead mother's rapist, whom she killed in self-defense as a little girl? Strategically plant four firebombs around the building and set 'em off, of course!


This iconic season finale kicked off the summer of 1995 and marked the end of my freshman year of high school. 15-year-old me was too old for summer camp yet too young to be legally employed at a crappy job. So I spent most of those months with my nose buried in horror novels, hanging out at my aunt and uncle's beach club bungalow, and speculating about the fate of these fictional characters.

Granted, the bombs at 4616 Melrose Place didn't go off until the September premiere of the drama's fourth season (due to the sensitivity surrounding the real-life Oklahoma City bombing), but here's what went down twenty-five years ago:


I know what you're thinking: That detonator was definitely not child-proof, a little too easy to activate, no? And how come there was just one casualty after all that? (R.I.P. Morgan Brittany's Mackenzie Hart, who only appeared in one episode.) In the end, the biggest damage done, other than structural, was Alison's vision; she was temporarily blinded by the blast. Everyone else walked away with minor cuts and bruises, leaving their body fat percentages intact. (After all, this was an Aaron Spelling production.)

And for those characters who missed out on the big bang, there was still plenty of death to deal with: Jake pushed his evil brother Jess (a goateed Dan Cortese) off a building, while Matt was framed for the murder of his boyfriend's wife (Paul, the boyfriend, did it). Also killed: the writers' ability to concoct more compelling stories over the series' highly unusual 32-episode-per-season order.

Did Melrose jump the shark with this blatant ratings stunt? Sure. But did it make for OMG-worthy TV during a pre-hashtag-trending era? You bet your miniskirt-covered ass it did.