10 Years Ago This Week: "Lady Marmalade" & Six Feet Under 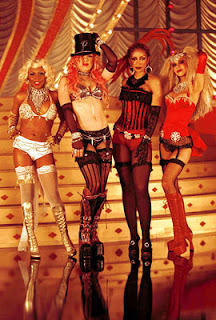 It's been a decade since Baz Lurhmann reinvigorated the movie musical with Moulin Rouge and Missy Elliot recruited her army of pop sluts to remake Labelle's 70s hit.

Along with superproducer Rockwilder, Missy employed 00s pop darlings Christina Aguilera, Mya, Pink, and Lil' Kim to strut their stuff in corsets and peacock feathers and bring some French-speaking funk into the new millennium. Coincidentally, the tune was also the lead single from the aforementioned movie's soundtrack and stayed at the top of the Billboard charts for six weeks, starting shortly after the 2001 Memorial Day weekend.

My last full summer living in New York was spent as an employee of Westchester County, working at Glen Island Park, lunching by the beach, taking train rides into Manhattan to take advantage of my turning 21, and getting hooked on a new HBO drama called Six Feet Under:

It just so happens that one my many trips down to the city that summer also included a matinee of Nicole Kidman's The Others at a theater down by the World Trade Center - exactly one month before that fateful day in September.
flashbacks music