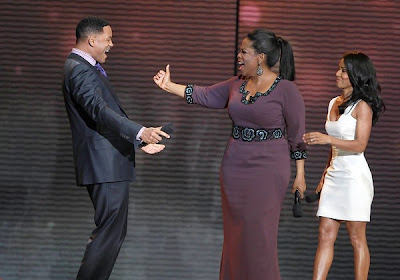 Today we bid adieu to a woman who is not only a talk-show host and mogul; she's a spiritual leader, an advocate for literacy, an educator, an icon, and undeniably, an American institution that has influenced the lives of millions. Today is one of those moments you'll want to remember so that you have an answer to the question, "Where were you when...?"

I was 6-years-old when the former local Chicago news anchor with the unusual name took to the stage and welcomed her first studio audience and first panel of guests. Since then, my memories of The Oprah Winfrey Show were scattered randomly over two decades' worth of afternoons. As a child, I knew that she was always there when I came home from school, always on after General Hospital. As a teenager, I knew she sometimes chatted with some cool guests and had gotten several intense exclusives. As a young adult, I admired her philanthropy and appreciated her vulnerability as she discussed topics that inspired movements and shot her above what was once considered fluffy daytime television for housewives.

I remember the varied opening theme songs (especially her own version of "I'm Every Woman" shortly after The Bodyguard soundtrack blew up). I remember the celebrity interviews (the cast of The First Wives Clubs, those fresh-faced new actors from that Friends show, that Whitney interview). And I remember the countless shows about improving one's life, whether it be through dieting (the wagon of fat!), wardrobe makeovers, loving yourself, or forgiving the unforgivable.

Now, as a 31-year-old viewer, I have been riveted by O's 25th and final season. The reunions, the shattered social taboos, the honored history, the love - how can anyone top what she's done and provided for her global audience? Answer: I don't think anyone can.

Where will I be today? I will be watching (Kleenex optional).

That video definitely still gave me chills though...
12:10 PM