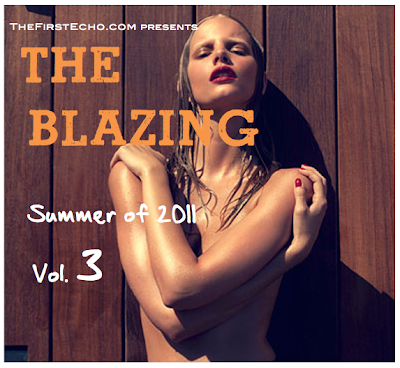 Apparently there's plenty of tunage to go around this summer. So much, in fact, I've assembled another 30 tracks for your listening pleasure; I present to you my third volume. After all, doesn't everything come in threes?

May this accompany you on your travels to the pool, to Comic-Con, to your grandmother's house, or to your local Starbucks for an icy Coconut Mocha Frappucino. Enjoy:

1. "Party Rock Anthem" by LMFAO
2. "Schoolin' Life" by Beyonce - Another deluxe edition track that unfortunately will never be released as a single for all to enjoy (why, God, why?), so get your fix of this refreshingly 80s-esque anthem of sass here:

3. "Aphrodite" by Kylie Minogue
4. "Talk Talk Talk" by Darren Hayes
5. "Big Fat Bass" by Britney Spears feat. will.i.am
6. "Punching in a Dream" by The Naked and Famous
7. "Galaxies" by Owl City
8. "Not That Kinda Girl" by The Saturdays
9. "Mr Saxobeat" by Alexandra Stan
10. "Changed The Way You Kissed Me" by Example - With faint echoes of New Order's "Blue Monday," this latest single from the English rapper soars during its hard-hitting chorus:

11. "This City" by Patrick Stump feat. Lupe Fiasco - The Fall Out Boy frontman shows his funky-soulful side, and all is hella good.
12. "Highway Unicorn (Road to Love)" by Lady Gaga
13. "Took My Love" by Pitbull feat. Red Foo, Vein & David Rush - A more understated dance jam from Mr. Worldwide.
14. "Stitch by Stitch" by Javier Colon
15. "Feels So Good (Radio Edit)" by Armin Van Burren feat. Nadia Ali
16. "Just Once" by Databoy
17. "Major Minus" by Coldplay
18. "Gold Mine" by Breanne Duren
19. "Cryin' Over You" by The Nightcrawlers feat. Taio Cruz
20. "Love Gun" by Michelle Williams - The forgotten child of Destiny recently put out this buzz single that, despite the cheesy Casio keyboard breakdown in the last third, is like one of those songs to which you'll be dancing on your own (after several vodka tonics, of course) long after last call.
21. "The Yacht Club" by Owl City
22. "So You Into You" by Ledisi
23. "Set My World On Fire" by The Feeling
24. "When The Lights Go Down" by Grace V
25. "The Worse It Gets" by Penguin Prison:

26. "Who Dat Addictive Bad S&M Girl" by Marc Johnce - The master of the mash-up outdoes himself with this supersonic mosaic of Top 40 dance hits.
27. "Put Your Hands Up (If You Feel Love)" by Kylie Minogue
28. "Stay Awake" by Example - The bloke's second tune on this list is a celebratory ode to "a messed-up generation" punctuated by the drowsy vocals of the rapper otherwise known as Elliot Gleave.
29. "You Are A Tourist" by Death Cab for Cutie
30. "Sweetest High" by Nadine Coyle
Email Post
Labels: music playlists summer playlist