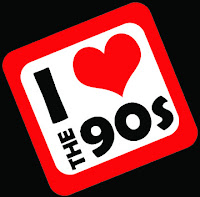 I think one of the prerequisites for settling into your early 30s is accepting that teenagers today don't have what you had when you were their age (and vice versa).

Also accepted is the more apparent fact that 90s nostalgia is alive and kicking in the 2010s.

By now, popular culture has gotten it down to a science: What was hot 20 years ago tends to rear its vintage head and come back into vogue. The 80s loved its 60s. The 90s grooved to the 70s. And the 00s reveled in the 80s. So it makes logical sense that the 90s have now become all the rage.

The proof is all around us...

The CW caught on early by bringing back 90s stalwarts 90210 (successfully) and Melrose Place (unsuccessfully) three television seasons ago. The Backstreet Boys are back on tour (granted, co-headlining with NKOTB). No Doubt is prepping to release a new album later this year. Plaid flannel is in. VH1 has begun to air a block of morning programming dedicated to videos by the likes of Ace of Base, Garbage, and EMF. There's that Total Recall remake starring Colin Farrell due in 2012. Demand for Jurassic Park on Blu-ray has generated a sizable fanboy storm. TeenNick kicked off "The 90s Are All That" earlier this year, a late-night line-up featuring reruns of Clarissa Explains It All, Rugrats, and other Clinton-era pleasures. Turn on any radio, and you'll find enough Ibiza-esque dance beats on Top 40 to bring any La Bouche or Real McCoy fan to tears. And I have no doubt in my mind that on college campuses across America, students are breaking out the Doc Martens, floral skirts, and turtlenecks to partake in 90s-themed keggers.

Before you raise your fists to the sky and dramatically shout, "It's too soon!" remember this inevitable truth: it's all cyclical. What is old becomes new again. So kudos to you if you were one of the few who held on to that unflattering Tommy Hilfiger polo and VHS copy of Spice World. When the present becomes too much to handle, or if there's nothing new to enjoy, we look to the past. All of this, I believe, correlates to the fact that we are all slaves to a culture with a growing attention deficit.

If you're a follower of this small blog of mine, you know what kind of adolescence I endured during said decade: An all-boys prep school education, an obsession with Alanis Morissette's life-changing Jagged Little Pill, geeky speech-and-debate triumphs, and a penchant for keeping my nose deeply planted in every paperback novel ever written by Christopher Pike, Dean Koontz, and R.L. Stine.

I know I am not alone when I cringe at the thought of a decade I mostly cherish coming back to entertain and ultimately haunt us for the next several years.

Praying there's no Independence Day reboot while I start outlining my script for a new X-Files movie,