The Thing About SYTYCD 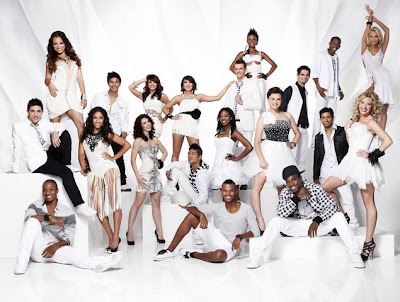 Why, after eight seasons, Fox's So You Think You Can Dance continues to take a backseat to ABC's increasingly ingratiating Dancing With The Stars remains a mystery to me. Is it because it's a summer show? Is it because the general perception is that it's mainly "for kids"?

SYTYCD's ratings are frustratingly measly compared to those of the below-cruise-ship-variety-show standards seen on Stars. Whereas DWTS seems to revel in sensationalistic cheese, SYTYCD celebrates true artistry. While I do acknowledge how much blood, sweat, and tears all of those reality stars, football players, and Tinseltown burnouts go through, I can't help but scoff at their efforts...because there seems to underlie a narcissism that fuels them to go on, stumble across the stage to non-pro choreography, and soak up a spotlight they hope will shine long after they're voted off. And here's a little-known fact: they get paid handsome salaries per episode, none of it going to charity. If that doesn't turn you off, then by all means, continue watching.

It's a shame, because you'll be missing something as epic as this:


Meanwhile, over at SYTYCD, we have young artists who are simply chasing a dream and unabashedly exposing themselves on the dance floor through refreshingly diverse dance numbers that range from Bollywood flamboyancy and elegant Ballroom to emotional Contemporary and bumpin' Hip-Hop (the weekly theme-driven costuming and make-up is an extraordinary achievement as well). And just because it doesn't have any "Stars" in its title, it doesn't mean they don't have any famous faces grace the studio every week. This season the show welcomed celeb guest judges who, for the most part, offered very helpful feedback. Audiences were treated to delicious soundbites from Kristin Chenowith, Debbie Reynolds, Jesse Tyler Ferguson, Neil Patrick Harris, Rob Marshall, and Mother Monster herself, Lady Gaga. Most surprising was the way their special appearances didn't feel stunty or forced. I'm sure each had something to promote, but they were also there because they wanted to be there. They too are genuine fans of the competition and are constantly wowed by the physics-defying movements made by these fiercely talented individuals week after week.

Case in point - the jaw-dropping July 27 performance from one of my personal favorites, contestant Melanie Moore:

The Top 20 from earlier this summer:

What I also love about this show is its dynamic use of music and its way of turning its "cast" of choreographers into celebrities. I've been introduced to amazing songs I wouldn't have known about had it not been for the wise selections made by Tabitha and Napoleon (Nappy Tabs) and the fabulously freaky Sonya Tayeh (thanks, girl, for letting me know about "Game On" by District 78). And don't even get me started on how I nearly lost my shit when I spotted Mia Michaels and Tyce Diorio lunching at Houston's in Century City.

Jenny said…
I don't watch either, but perhaps "Stars" is more popular because audiences like watching other people (ESPECIALLY celebs) work hard (and sometimes fail). Whereas "SYTYCD" features actually talented dancers, and most people watching don't understand what they are doing and are just jealous they can't do it?