Preview of a Bestseller 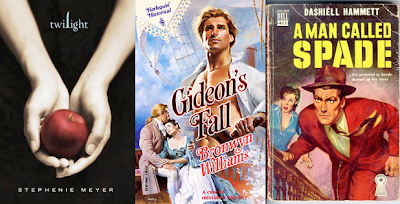 If this were a noir-ish crime novel, I would open this chapter describing the raindrops on a window of the late-night diner where a hardened detective is sipping coffee and waiting for his next case to come walking in. There would be adjectives used to convey the mood of the place, the lighting from the neon sign outside, the glare of the veteran waitress who’s desperate for a cigarette break in the back alley where she once fooled around with a greasy short-order cook who eventually got drafted to war.

If this were young-adult romantic thriller, I would start out with the chaotic hustle and bustle of a high school hallway and delve into the thoughts of a female protagonist who’s been pining for the pale-skinned new boy in town with a dark and deadly secret (his habitual drinking of human blood wouldn’t be revealed until the third or fourth chapter – naturally). There would be complaints about upcoming exams, inner monologues about single-parent homelife and general adolescent loneliness that could come off as unbearable, self-absorbed whining to anyone over the age of 25.

And if this were some cheap, guilty-pleasure Harlequin paperback – the kind featuring a shirtless dude with a rippling torso embracing a damsel in apparent distress – I would begin with a few cliché-riddled lines about a hot summer day on a bayou with characters named Rebecca, Blake, Susannah, and Troy. The heroine’s troubled past would be immediately explored in order to establish her strengths and weaknesses. Mama was an alcoholic, Daddy died in a war, and brother Bobby was in jail for a crime he didn’t commit. Soon a tall, dark stranger strolls into the café where she works, and he turns out to be the savior she’s been yearning for after all these years. Yada, yada, yada.

But this isn’t one of those novels.

This also isn't one of those novels that attempts to be unlike any novel you’ve read before...

This is merely the opening chapter to what I hope will be my first novel, whether it be a suspense thriller of my own or the first volume of my fully fleshed-out memoirs that has been years in the making. Or just plain wishful thinking, a gesture to the universe to grab its attention.

Publishers, can you hear me?