Carmageddon: L.A. at its Most Overdramatic 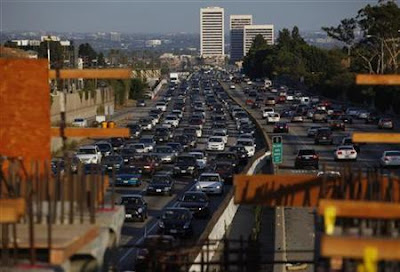 When it comes to making a fuss, Los Angeles is the master of it. The city with a reputation for being one giant playground, full of people with narcissistic tendencies, is that five-year-old child screaming in the sandbox, "Mommy, look at me! Look at me!" Here in sunny SoCal we have perfected the art of making mountains out of molehills, or rather, swimming pools out of soy lattes.

And we can't help it. We got the constant threat of earthquakes. We got mudslides. We got the Oscars, the Emmys, every ass-kissing awards ceremony imaginable. We got the Kardashians.

If you haven't heard by now (i.e. if you live in a normal part of the world), L.A. is going through a crisis. Ten miles of the 405 Freeway, one of the major interstates here in Southern California, will shut down tonight for 56 hours due a bridge demolition that is part of a $1 billion project aiming to widen the northbound and southbound lanes. It was only a few weeks ago that the press coined the term "Carmageddon" to describe the devastating effects this closure would have on a city where driving is practically a way of life. Traffic jams from hell! Don't go outside! The worst rubbernecking in history! And so forth.

This is a classic case of L.A.'s obsession with creating a brouhaha and focusing the world's attention on itself. And Carmageddon couldn't have had a better publicist. Stephen Colbert, Jay Leno, and others have had their fun ripping on the city's self-inflicted paranoia and fears. Carmageddon.com is selling T-shirts (I "405" L.A.) and posting tips and precautionary videos as dramatic - and hysterical - as those nuclear war propaganda films from the 1950s. Restaurants and bars are offering Carmegeddon specials ("Irish car bombs for $2!"). Officials have even opened an emergency operations center...

Leave it to Los Angeles to create a frenzy about its own impending doom as overdramatic as one of the cheesy action films it spits out year after year. Only can L.A. be the one city in America that makes national headlines about its road conditions and chaotic commuter culture. When was the last time you saw CNN coverage on road closures in Alberquerque or Des Moines? I don't think Diane Sawyer has ever reported on traffic detours in Lansing, Michigan.

This shit is serious, people.

Now excuse me while I park my Prius at a Coffee Bean and glue my eyes to a laptop while I wait for my insufferable world to end.

Jenny said…
Boston made national headlines about its road conditions... But that was due to the Big Dig. :)
6:47 AM