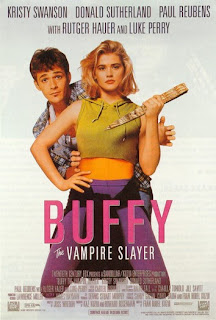 “I can’t believe I’m in a graveyard with a strange man hunting for vampires on a school night.”

This line of dialogue perfectly exemplifies the 1992 film that brought TV heartthrob Luke Perry to the big screen, showed us a different side of Paul Reubens, and – oh yeah – inspired a long-running, critically-acclaimed television drama that starred Sarah Michelle Gellar: Buffy The Vampire Slayer.

Back in the summer of ’92, the movie, directed by Fran Rubel Kuzui, earned more than double its budget ($7 million), making it a moderate success compared to its box office competition at the time – Death Becomes Her, Honey I Blew Up The Kid, and A League of Their Own. Taking on the titular role, Kristy Swanson did an admirable job as a cheerleader from the Valley who finds out she's The Chosen One, the next in a long line of descendants who must vanquish the vamps of the world. Unfortunately, it's one of the few roles she's remembered for. I mean, really, what else has the girl done, besides Deadly Friend and Higher Learning, that sticks out in film history? I would like to know: Where is she now? 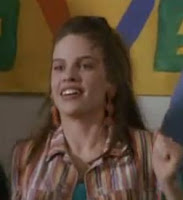 Regardless, the fun thing about revisiting a classic film (yes, I just called it a "classic") is rediscovering who's who in the supporting cast, and BTVS doesn't disappoint. We've got a baby-faced Hilary Swank, way before her first Oscar win, playing the ditzy Kimberly. We have a young David Arquette, four years before he assumed the role of Officer Dewey in Scream, playing Pike's best bud Benny, a slacker who becomes a creature of the night (one funny scene has a hungry Benny floating outside Pike's window looking for a midnight snack). And then there's a young(ish) Paul Reubens, before those pesky sex offender charges, being a hoot as Amilyn, the right-hand man --because he's only got one arm for most of the movie -- to the film's Big Bad, Lothos (a hammy Rutger Hauger).

As for Donald Sutherland, who plays Merrick the Watcher, the old dude was still an old dude back then, and something tells me the actor was only there for the paycheck. Go ahead and check out the DVD's brief behind-the-scenes featurette, in which the cast has a hard time wrapping their heads around the goofy movie title, and you'll see what I mean. 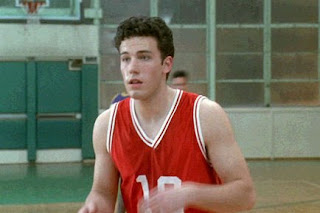 But those finds aren't nearly as fun as the uncredited cameos that made me rewind and pause my ancient VHS copy (yes, I still have a VCR). Early on, Ricki Lake appears at a local teen hangout (“I’m Charlotte, I’ll be your waitress”). How she didn't earn a credit, especially after Hairspray, I'll never know. And then, halfway through the movie, keep an eye out for a 19-year-old Ben Affleck as Basketball Player #10. The future Oscar winner (and Mr. Jennifer Garner) has a blink-or-you’ll-miss-it run-in with a teen vamp on the b-ball court.

How does Buffy The Vampire Slayer hold up 20 years later? Only fans who grew up with these characters will still be able to appreciate the fun campiness on which the movie is built. First-timers may poo-poo some of the cheap stunts and make-up. But remember, whereas a “film” takes itself seriously, a “flick” doesn’t, and Buffy clearly falls under the latter. Viewers may also get a kick out of the very datedness of the look and styles (“That’s sooo 90s!”). Plus, there’s the equally dated soundtrack, which serves as a snapshot of the pop charts in the early 90s. C&C Music Factory, Divinyls, and Toad The Wet Sprocket all have their turns on the playlist. But when all is said and done, it's still nifty to see a young female character evolve from a shallow cheer-tator (Bring It On reference alert!) into an ass-kicking, pre-Lara Croft, pre-Alias heroine who learns a few things about growing up.

Joss Whedon, the film's screenwriter, has been known to have expressed his disappointment with the way his script was adapted for the big screen. That's why, four years later, he felt the need to right the wrong, returning to 20th Century Fox and pitching Buffy as a darker heroine in a TV series that reinforced the high-school-is-hell metaphor. Luckily at the time there was new, fledgling network called The WB where executives thought it could be placed to entertain a very sought-after young demographic ("There's this new group called Generation Y...")

And the rest is history.

As a matter of fact, this month happens to mark the 15th anniversary of the television series. I was 16 going on 17 -- and a rabid fan of teen horror -- when it premiered on March 10, 1997. It was as if the show was created just for me. Each week a new monster terrorized the students of Sunnydale High, and each week I was titilated by the sparkling dialogue and clever twists in every episode. Who could have possibly guessed that this little teen show based on a schlocky B-movie would evolve into a fully satisfying (and Emmy-nominated) drama featuring fully developed, iconic characters, some of whom would spin-off into their own sagas? No one.

There isn't enough room here to write about the awesome brilliance of the show, so let's save that for later...and let us now raise our glasses and salute the one film that started it all.

Happy Double Anniversary, Mr. Whedon. And thank you for bringing that stake-wielding cheerleader into our lives.