Madonna Enters Her Fourth Decade of Music With MDNA 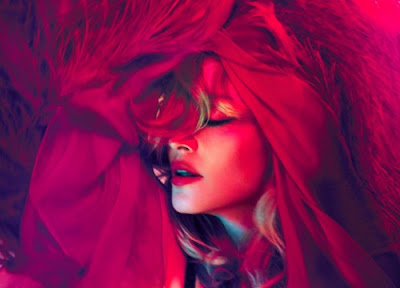 Today's Word of the Day is: pandering.

As in, "Upon listening to all of the preview tracks from Madonna's forthcoming album, MDNA, it seems like the Material Girl is pandering to fans of Gaga and Rihanna." It's quite ironic, given the fact that, several weeks ago, Madge was recorded saying that Gaga's music, particularly the blockbuster "Born This Way," was "reductive" (look it up).

Die-hards and pop purists may be quick to argue that Madonna "started it all," and while they may be right (I myself think she deserves all the recognition and respect for keeping up with Ke$has), the woman who's known for brilliantly reinventing herself with each album is finally showing signs of...recycling. Exhibit A: the preview video for her latest single, "Girl Gone Wild."

With shades of "Justify My Love" and "Human Nature," the video doesn't break any new ground, which is fine, but it doesn't do anything for the uninspired song either. "Girls, they just wanna have some fun," she chants. Funny, that was the same sentiment shared by Cyndi Lauper 27 years ago. And that whole, artsy man-on-man action? She may have started that homoerotic trend back in the 90s, but Gaga brought it to new heights in 2010's "Alejandro." 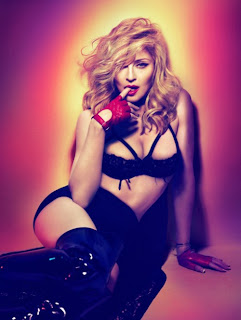 Here's the thing: most consumers of pop music in 2012 weren't even born when M's "Vogue" debuted on the charts and boldly solidified her icon status. So why sink to their level in musical tastes? Is there that much pressure to remain relevant? Could there have been a hint of bitterness and jealousy when she dropped that "reductive" comment on Mother Monster? I can't shake the feeling that, at the stupendous age of 53, Madonna is starting to resemble that middle-aged mom who still wears Juicy Couture thongs and wiggles her hips to anything with a deep bass. When I first heard "Give Me All Your Luvin," my ears cringed, and for the first time, I felt embarrassed for Lourdes, Rocco, and little David. Like many critics, I was offended by the choice to use such a derivative tune as the lead single and employ Nicki Minaj and M.I.A. as distracting filler. If you recall, Madonna used the same tactic back in 2008 when she brought Justin Timberlake on as a collaborator for "4 Minutes," the first single from the hit-or-miss Hard Candy. While more tolerable than "Luvin," it still reeked of "Hey kids, look at me gettin' down with Timbaland!"

Your Madgesty, you need not conform to the sounds and styles of Top 40. What happened to paving your own way and breaking the rules? Look at 1998's Ray of Light. While radios were succumbing to boy bands and hip-hop superstars, you remained in your groove, stayed strong, broke down the door of electronica, and delivered a rarity: meditative dance pop.

I guess what I'm saying is that I was -- still am -- hoping for MDNA to be her next Confessions on a Dance Floor, arguably her best album from the 2000s. And once you move past the Auto-Tune, there are a few bright notes in the teasers. "Love Spent" sounds like a promising electro-pop ditty, while "Turn Up The Radio" appears to be a traditional house anthem that sticks close to her roots.

Give us your best, M. We know you still got it in you. Justify our love.