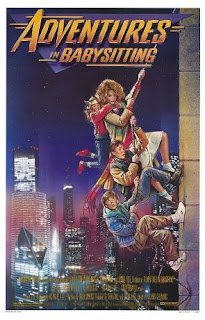 That running Playboy gag. The one-handed tow truck driver. The L train standoff with the Lords of Hell. And Thor...

25 years ago this summer, a high school senior named Chris Parker (the girlfriend everyone wanted to have, Elisabeth Shue) loaded up her mom's station wagon with a trio of youngsters and headed into downtown Chicago to rescue her BFF Brenda from the big, bad, and scary riffraff of the inner city. Adventures in Babysitting opened in theaters during the 4th of July weekend of 1987, going up against heavyhitters like Spaceballs, Innerspace, and Beverly Hills Cop II.

I wasn't introduced to the film until one day in 1990 when my mom and I made our monthly excursion to Blockbuster Video (*Kids, that was a store people drove to in order to rent VHS cassette tapes of movies -- when you were done with them, you had "be kind and rewind" the tapes and drive back to the store to return them) I watched the movie repeatedly while we had it in our possession. When my grandmother came over, I popped it into the VCR and made her watch it with me. Before I went to bed, I watched it again. 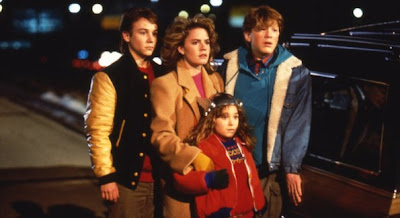 Little did I know that -- 16 years later -- I would work alongside the man who wrote the script to this 80s comedy classic, David Simkins (he also appears in the film as one of the frat guys who mistakes Chris for a Playboy model). Back in 2005, I was an assistant to the showrunner of the short-lived NBC drama, The Book of Daniel. David was one of the co-executive producers on the show, and while being stationed outside the writers' room, I decided to look up the staff's credits on IMDB. The 10-year-old in me squealed with delight as I established my one degree of separation from one of my favorite movies (such is the case after one has worked long enough in this industry). Naturally, I geeked out and had to ask him what it was like on set. "Rushed," I remember him answering.

As I got older, I also picked up on various pieces of trivia surrounding the film. It was the directorial debut of Goonies and Gremlins writer Chris Columbus, whose career would later blow up with Home Alone and follow with more hits like Mrs. Doubtfire and Harry Potter and the Sorcerer's Stone. Valerie Bertinelli, Bridget Fonda, Melanie Griffith, and Michelle Pfeiffer all auditioned for the role of Chris Parker at some point. Melrose Place's Andrew Shue, Elisabeth's brother, appears very briefly in the frat party scene when Chris dances with her cute, collegiate knight in shining armor. And yes, the music that's playing when Chris and little Sara are watching TV at the Andersons' home is the score from Halloween (producer Debra Hill also worked on the 1978 slasher flick).


Apparently, as the above video clip demonstrates, teens in the 80s just loved to dance and lip-sync to the pop songs of yesteryear. Ferris Bueller did it on a parade float, and Tom Cruise arguably kicked off the trend when he slid across that living room floor in Risky Business.

For a while, the Hollywood rumor mill had been churning out sporadic news on a remake. While I consider this to be blasphemous to the nth degree, I can't say I'm surprised given the industry's insatiable appetite to "reimagine" the shit out of existing properties. At first, former Disney princess Raven Symone was attached to star and play the babysitting role, overseeing a new generation of kids while they navigate the big, bad city. And then, of course, there was last year's unsuccessful The Sitter, in which Jonah Hill brings his charges to the inner city in order to bang a hot chick (Ari Graynor), eventually landing all of them in hot water. While this R-rated flick was never officially called a remake of the 1987 classic, everyone at 20th Century Fox probably took advantage of all the loopholes needed to avoid any potential lawsuits. Those devilish pricks.

Then there was the unsold 1989 CBS pilot adaptation which starred a pre-90210 Brian Austin Green and a pre-Blossom Joey Lawrence. Having developed an obsession with the movie, I remember watching the only produced episode when the network aired it that summer in order to fill empty timeslots (a common practice among broadcasters back then). Sample plot: the kids get trapped in a sewer! (Good riddance) 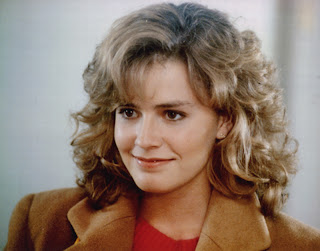 Congratulations to the cast and crew of Adventures. 25 years is quite a milestone. Elisabeth Shue, I'm still looking forward to what you'll do next. As a matter of fact, while screening the film during one of my monthly movie nights, my friends and I Googled the rest of the cast to see what they've been up to. Anthony Rapp (Daryl), as most of us already knew, went on to play Mark in the original cast of Rent on Broadway. Keith Coogan (Brad) went on to co-star in another babysitting-themed flick (Don't Tell Mom...), and he recently appeared in that Funny Or Die viral video blasting Kirk Cameron's homophobia. And as for Maia Brewton, who played Thor-obsessed Sara, she is now a lesbian happily married to a producer and raising twin sons. They grow up so fast...

Thank you Chris Columbus, and thank you David Simkins, for giving me a reason to laugh every time a friend shouts out "Get outta my house!" and for giving us that little ditty known as the "Babysittin' Blues."

I promise to never f**k with a babysitter.

Jenn said…
I just watched this recently on Netflix! LOVE it. And I loved seeing Bradley Whitford and Vincent D'Onofrio (as Thor!). P.S. I can't watch "Avengers" or "Thor" without thinking of "AiB."
12:11 PM