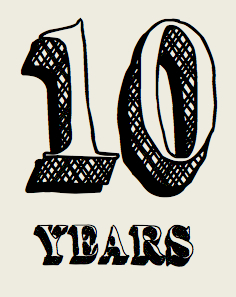 On June 27, 2002, yours truly landed at LAX with two giant suitcases, a Jansport backpack, a pair of wide eyes, and a curious case of naive ambition.

From a lowly production assistant who had to rely on a Thomas Guide map to maneuver himself through the boulevards of a new city...to a coffeeshop-hopping, funemployed freelancer who's always on the lookout for the next creative gig, I have become somewhat jaded after wearing several different hats over the past decade (In my best Ed Asner voice: Back in my day, we e-mailed AND faxed resumes. There was none of that social networking business). But one thing that hasn't changed is the ambition I carried with me when I departed New York's LaGuardia Airport on that fateful summer day. I proudly chose to live in a city where ambition is embedded in people's DNA. It's their oxygen. I also chose to live in a city where genuine talent is usually sideswiped by shallow trends and distracting gloss, making it all the more difficult to keep the "fire" burning. However, despite all of the jokes and pokes at the unavoidable traffic, the hipsterisms (you're not just pretty dumb; you're pretty and dumb), the ideal weather, and the increasingly blurred lines between work and play, I love to call L.A. my home. I really do.

If I didn't love it, then I wouldn't be writing this from a cafe while spying on a former reality-TV star who's on a first date with a well-muscled gentleman caller, would I?

I'd like to say that I have no regrets, because all of the decisions I made have brought me to this point in my life. And God knows I've gotten nostalgic and written about my L.A. anniversary plenty of times before (you can catch some of these reflective moments here, here and...here). However, if for some otherworldly reason I could travel back in time, there are some things I would tell my 22-year-old self. While some are warnings and silly "what if" fantasies, others are reassurances that would only guarantee my life's path. Here we go...

• Take the internship at that small independent production company in Westwood because you'll meet a fabulous woman named Kathleen Newlove who will change your life.

• Write. And then write some more.

• Make sure your 2005 holiday flight home departs from Long Beach Airport and that you sit at the gate next to a familiar-looking guy named Matt Emert.

• It's okay if you don't get that job assisting the executive producer on the first season of that little reality show called America's Next Top Model.

• It's okay if you don't get the PA gig on the first season of that Kyra Sedgewick cop drama called The Closer.

• Go with Karim to that industry mixer at Here Lounge because you'll meet someone with a name as interesting and unique as yours: Swaga Deb. And on that note, make sure to accompany Karim one night to Jerry's Famous Deli on Beverly, for you will meet one Doug Kushla whose laptop will come in handy when you receive your first iPod.

• When you take your first trip to Chicago in the summer of 2008, do not drink the spiked lemonade at Roscoe's. Just...don't.


• Don't forget to send a Thank You card.


• In May of 2004, call your father before he pushes himself too hard on that golf course.


• Write a pilot about a high school glee club featuring a ragtag group of students.


• Don't hold back on expressing your feelings to a close friend. 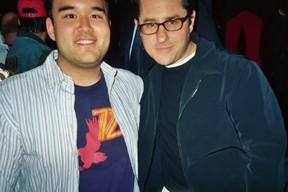 • Do whatever it takes to get a meeting with J.J. Abrams.


• Order the broccoli rice at Bossa Nova; it's a much healthier (and tastier) side option.

At the risk of sounding cheesy, corny, and all-of-the-above, I can't help but sit back and cherish every single job I've had, every single moment I've experienced, and every single friendly face I've met throughout the past decade (I've seen my fair share come and go). The nights driving down Santa Monica Boulevard. The countless searches for a parking space in West Hollywood. The delicious Sunday brunches on sidewalk patios. The crappy paychecks. The movie nights. The road trips...everything has its own little significance, and all of it adds up to a life I couldn't have imagined when I booked that one-way ticket to California shortly after graduating from college.

Not only has this been a ride of my life, it's been one continuous and ginormous lesson that I'm constantly learning with each passing day. I thank everyone who has followed and supported me ever since I sent that first e-mail -- my inaugural, post-collegiate "life update" -- from an air mattress on the living room floor of a friend's Burbank apartment (long before I ever got acquainted with a blog).

And with that, I leave you this:

Now someone give me a damn ribbon or a badge.

*I shall toast this landmark occasion with my closest friends, my second family, tonight at the newly opened Tortilla Republic in West Hollywood (it's where Fat Fish used to be...See? I've lived here long enough to identify previous retail spaces). Swing by if you'd like.
flashbacks Hiko's Hollywood the personal crap

Unknown said…
I'll take thrBossa Nova broccoli rice as a shout out! Congrats on 10yrs, and here's to a lifetime of adventure in LA!!

Alicia said…
Happy 10yrs in LA to my London buddy and almost birthday buddy!!! What a ride you've had, and I've loved keeping up with it and being filled with envy :) Congrats Hiko!! Keep it coming.
9:09 AM

Anonymous said…
Picture this: It's late January and the year is 2004... I had just met a lovely boy named "Pico."