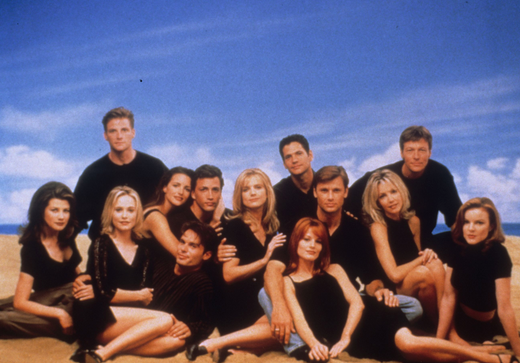 On July 8, 1992 a young woman named Natalie ran out of a West Hollywood apartment complex in the middle of the night -- suitcase in hand -- leaving behind roommate Alison Parker without enough money for rent...

And so began the convoluted chronicles of several twentysomethings who resided at a Los Angeles address that would soon become one of the most popular destinations in primetime television.

During that summer, I was a 12-year-old bookworm who had nothing else better to do than stick my nose in paperback novels and rent movies from Blockbuster Video. All I knew was that MP was a sexier spin-off of the hugely successful Beverly Hills, 90210 (remember when Kelly hooked up with older handyman Jake before her mom's wedding?) and featured older characters, which I preferred. (I wasn’t your average pre-teen; while my peers obsessed over the latter, I found entertainment in more adult fare like Knots Landing and Picket Fences.)

Melrose was unlike most dramas in terms of its production. While most one-hour shows produced 22 episodes within a full season, MP pumped out 32. This proved to be both beneficial and detrimental for viewers. Those extra episodes per season meant less reruns but also a higher demand for creative storylines. It may have run for 7 seasons, but in all actuality, it felt more like 10. Maybe that's why many felt it depleted its creative juices towards the end of Season 5 (we'll get to that later). 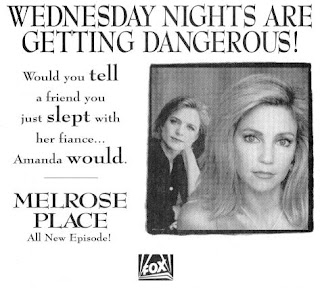 The first season was a soggy, episodic mishmosh of GenX melodrama (My car broke down! My roommate ate all of my peanut butter!). However, towards the end of the show's inaugural run, executive producer Aaron Spelling, as TV historians will tell you, brought in what he called his "lucky penny": actress Heather Locklear of Dynasty and TJ Hooker fame. Inserted into the opening credits as a "special guest star" (where she stayed for the following six seasons - don't ask me why), Locklear assumed the role of Amanda Woodward, that miniskirt-wearing minx who would eventually climb up the corporate ladder at D&D Advertising, buy the whole damn apartment building, and create a ripple effect within several relationships. The reviews and comparisons were instantaneous: "It's Dynasty: The Next Generation!" And so forth. Needless to say, I collected every magazine cover and TV Guide ad.

By Season 2, things started to get juicy. Amanda snagged Billy from Alison. Michael ditched Jane to be with Kimberly (a pre-Desperate Marcia Cross). And a feisty, little redhead named Sydney Andrews took up residence at 4616 Melrose (did I forget to mention that wig-swapping, incest-driven wedding finale?). However, nothing could beat the nighttime soap's third season during which the show reached its creative (and ratings) zenith. More affairs! Corporate takeovers! Attempted murder! Sex cults! And let's not forget one of the best television cliffhangers to come out of the Clinton era, the action-packed finale in which Dr. Kimberly Shaw goes off her rocker, planting several firebombs throughout the complex, her thumb hovering over the detonator in the final shot (the actual fireworks didn't go off until four months later due to the sensitivity surrounding that real-life bombing in Oklahoma City). 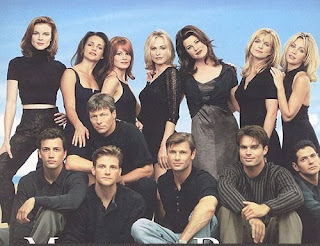 Season 4 was what I like to call The Season of Cray. After that explosive, shark-jumping premiere, it was as if the writers had flung random words and adjectives at the wall to see what would stick -- kind of like that Magnetic Poetry on my refrigerator. A sample: multiple personalities, pool drownings, chandelier-crashing mobsters, head-on collisions, girl fights, sabotaged fashion shows, Jane the stroke victim, Sydney the fashion victim, illegal lobotomies, mental institutions and...Loni Anderson.

Once the fifth season rolled around, producers and writers had learned their lesson, bringing the focus back on relationships, particularly long-term ones like the unlikely pairing of Jake and Alison (somehow, it worked), and crafting a nifty mystery surrounding the arrival of Taylor McBride (the scene-stealing Lisa Rinna) and her chef husband Kyle (the charming Rob Estes). The season 5 finale was classic Melrose despite the disrespectful dispatching of my favorite character: Sydney, on her wedding day, gets plowed down by a runaway car in front of the very church where she got married to Craig Field (Baywatch beefcake David Charvet) minutes before.

Then there was the sixth season, introducing us to Dr. Brett "Coop" Cooper (a former lover of Kimberly's, back in her comatose-in-Cleveland days) and his redheaded vixen of an ex-wife, Lexi (Jamie Luner, having just transferred from Aaron Spelling's failed Savannah over at The WB). The penultimate season ultimately demonstrated that the show was starting to run on fumes. Sam cheats on Billy with…a baseball player? Taylor fakes a pregnancy? Snooze. 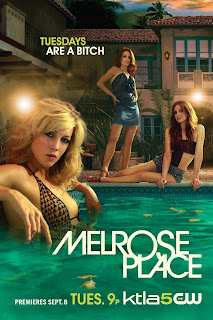 The seventh and final season reflected a severe cut in the show's budget. With the smallest cast in the series' history -- seven main players, including the return of Jane Mancini -- Melrose was starting to close its doors. But before Peter and Amanda walked off into the sunset to Semisonic's "Closing Time" after getting married for a second time (y'know, after faking their deaths to elude the Feds), the show tried to relive its heyday by digging another skeleton out of Amanda's closet (she murdered, in self-defense, the high school football jock who tried to rape her BFF) and turning unhinged Eve into the next Kimberly Shaw (nice try but...no).

As for that short-lived 2009 reboot on the CW, I am now, in hindsight, treating it as an 18-episode reunion miniseries. Despite the resurrection of Sydney Andrews (still scratching my head on that one), Jo Reynolds, Michael and Jane Mancini, and Queen Amanda herself, the show was, at best, an attempt to capitalize on the beginnings of a 90s nostalgia that seems to be seeping into the popular culture of the 2010s. It was an admirable accomplishment, what with the medical-intern-by-day-hooker-by-night plot and the introduction of the charismatic (and bisexual) Ella, played with relish by the fabulous Katie Cassidy (seen, left, in the iconic pool). 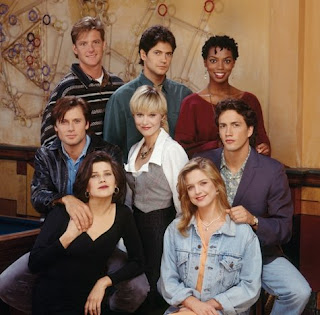 In the end, what seemed to be missing, besides an audience, was the fun camp that made the original so irresistible. It's a shame, because it had been getting really good at the end.

Now that I proudly call Los Angeles my home, I can't help but feel a little tickle of nostalgia whenever I drive by the real Melrose Place, a small, two-block street that's home to pricey boutiques (like that Marc Jacobs bookstore) and the delicious Fig & Olive. It's also fun to hear L.A. newbies describe any residence of theirs with the words "kind of like Melrose Place," just because there's a pool in the courtyard.

Thank you Darren Star, and thank you Aaron Spelling, for leaving an indelible imprint on my adolescence and even inspiring some of my friends to tap into their inner Amanda Woodwards and enter advertising (you know who you are).

Evan C said…
Wonderful piece Hiko! Really enjoyed reading all about it again! I adore this show and now that I have them all on DVD, I just keep watching it! Never gets old!
6:07 AM

Anonymous said…
Great blog, loved reading it. Melrose Place was my favorite show as a kid, and to this day I feel warm and fuzzy inside whenever I think about it (or watching it on dvd, I own seasons 1-5). Sydney will forever be the greatest tv character to exist. :)
5:14 AM