Why We Need To Keep Up With The Kardashians 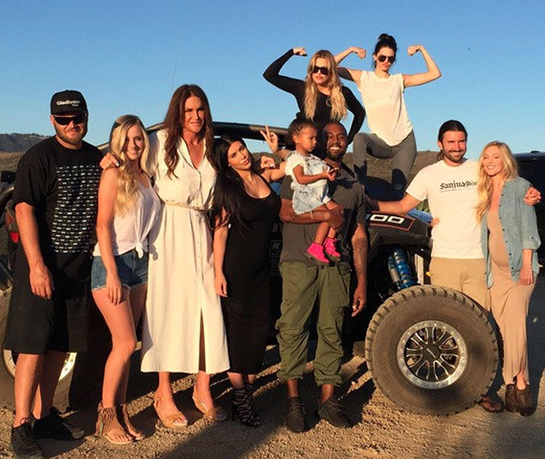 I would like to preface this post by saying that I have never watched a single episode of E!'s long-running reality trainwreck juggernaut Keeping Up With The Kardashians. I, like many of you, refused to give it any attention, criticizing the "unscripted" show as an exercise in narcissism, ego, and entitlement, proof of America's further descent into a pit of abysmal capitalist desperation.

But something happened earlier this week that made me see this TV family in a new light. When I caught Caitlyn Jenner's Father's Day photo of her mixed brood (Kim! Kanye! Brandon! Oh my!), I was immediately struck by the powerful image -- not because of what they wore or how they spent the holiday. I was affected by what the group shot represents: simply put, the future of America.

Newsweek once predicted that half of these United States of America will be non-white by the year 2050. That's a mere 35 years away. What does that mean? For the first time in this country's history, there has been a baby boom among its minority population. What does that mean? Chances are, more and more family portraits will resemble the above photo.

We've always prided ourselves on being a multicultural nation (well, so say politicians, certain administrations, and anyone with a progressive bone in their body -- despite recent headlines), but now we're moving quickly towards a mixed-race society at a rate we've never seen before. We're seeing more of a crisscrossing of family roots that our founding fathers couldn't have imagined back on that first 4th of July. And that, quite frankly, is a beautiful thing. (I should know, proudly being of a mixed heritage.)

Call it the Dawn of the Post-Modern Family Era.

Seriously, give that Newsweek article a read and see what you come away with. I like to think there are more pros than cons to this American evolution. Hence why, instead of keeping up with those boring, vanilla Joneses, we should continue to keep up with those kooky Kardashians -- metaphorically speaking, of course. (You still won't find me contributing to their ratings.)

After all, where else are you going to find a transgender woman spending a holiday with her biological children, an Armenian stepdaughter, her African-American husband, and their own adorable, genetically-blended daughter?