Pop Culture Rant of the Week: Thank You Donald Trump 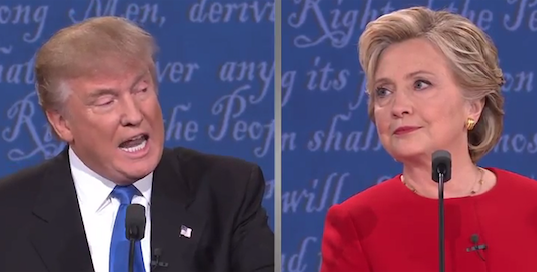 I just wanted to take this time to offer my thanks after watching your first presidential debate. (As expected, you acted like a 7-year-old throwing a tantrum while trying to convince his mom to stay up past his bedtime.)

Thank you for creating one big shitstorm of a campaign that has derailed the Republican party. Thank you for bringing crazy, bigoted Americans out of the woodwork so we can truly see whose narrow-mindedness is preventing progress and keeping our culture trapped in a time warp. Thank you for being so repugnant, so bigoted, so generally godawful, you allow us to clearly see Hillary Clinton as a shining example of what a U.S. president should be, regardless of any faults of her own.

You have crafted such a glaring contrast of an image, it would take the densest idiot in America to not see through you and your antics. And unfortunately, there are a lot of dense idiots out there who still don't see through you and continue to hang on your every word that drips with demagoguery.

Normally I don't get too political here on the interwebs, especially on social media. Usually I'm the guy who's easily tickled by a just-released pop track or movie trailer and likes to express my strong opinion on the state of cinema. Right now I could play Switzerland, take the neutral route, and encourage people to just vote -- no matter where you stand -- because everyone has the power to shape the future of our country and blah, blah, blah. But after careful consideration, after months and months of hearing such hateful rhetoric, after witnessing the daily vitriol that plays out on news feeds, and after realizing that getting older makes me less tolerant for all kinds of bullshit and ignorance...I emphatically say, "Fuck that." I am getting political. (Wow, I'm adulting hard right now.)

You could say I've reached a breaking point.

That said, if you continue to support Donald Trump, I'm about to force your hand into clicking that Unfriend button on Facebook. And I could care less, because we probably shouldn't have been "friends" in the first place. 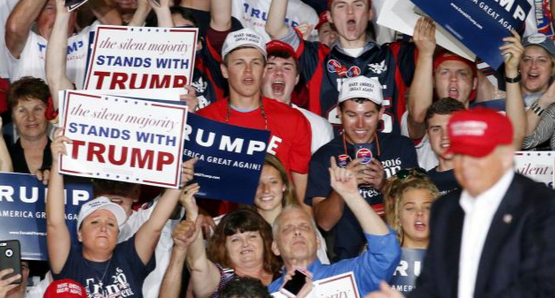 If you continue to support Donald Trump, you are, simply put, a disgusting human being. And I don't think you're disgusting simply because you're a member of an opposing political party. I find you disgusting because of your lack of decency, common sense, and overall compassion.

In a way, I feel sorry for you as well. I'm sorry that you're so easily swayed by scare tactics and overblown, unsubstantiated statements that spew out of the mouth of an egomaniacal reality TV figure with misogynistic tendencies. I'm sorry that you can't educate yourself and open your eyes to the strings that keep pulling you towards a dangerous ideology that threatens the fabric of American life. I'm sorry that you're trapped in your shithole of a town and can't find anyone else to love you but your second cousin, which doesn't count because she's only your second cousin, amiright?

I'm sorry that you don't even know the definition of a "demagogue."

Because I try to see things from all sides, I will take a brief moment to acknowledge your anger and rage at the government. I get why you're rooting for a shady millionaire with no experience in public service. To you, he's a great alternative to the usual, untrustworthy stiffs that inhabit the highest office in the land. He's a radical choice, possibly someone who will get shit done.

But guess what? All signs point to the contrary. And you keep putting up your blinders, shutting out the frightful statistics, studies, and stories that indicate how wrong of a candidate Trump is. You're the ostrich with its head planted firmly in the ground. You're the petulant child who covers his ears with his hands yelling "No, no, no!"

Frankly, you're the reason why a lot of bad things happen in this country.

And Donald, you're egging these folks on. It's an unbelievable ability to have, you know, considering how far up your own ass your head is.

Mr. Trump, you're the new definition of hubris. (I'm surprised Wikipedia and Dictionary.com haven't uploaded your headshot to their respective pages for the word.) You too are guilty of putting up blinders, and it's most likely because of the sheer amount of pride you possess. In your mind you can do no wrong, and denial has become your BFF. Your false sense of self is abominable. I pity the psychiatrist who will one day be tasked with diagnosing you with whatever mental ailment befalls you. Actually, scratch that. I will celebrate the psychiatrist who will finally unearth the source of your douchebaggery, unmasking you as a person responsible for leaving a shit stain across this great nation of ours. And I say "great" because it is a great nation. There's no need to make it "great again."

In fact, by repeating your slogan ad nauseum, you're emphasizing all things negative about America. Not only are you a well-known fat-shamer, body-shamer, and class-shamer, you're also a country-shamer. You're implying that America is a terrible place to live. And it's been scientifically proven that shaming doesn't improve anything, especially when no clear-cut resolutions are offered by the shamer. It only makes things worse. (I for one would not like to see Back to the Future Part II's alternate universe become a reality.)

You should've looked that up before picking a phrase to fit on those caps and posters.

But thanks again for being you. Because those of us who are voting for your opponent can only grow stronger while you dig a deeper hole for yourself.

For some really brilliant insight as to why our current political climate is what it is, read Andrew Sullivan's New York Magazine piece titled "America Has Never Been So Ripe for Tyranny" here.
hot topics Pop Culture Rant of the Week