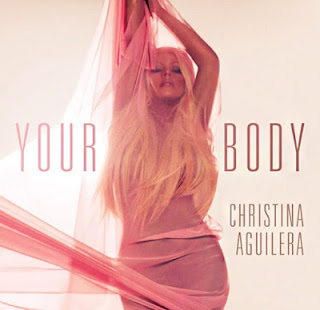 Christina Aguilera's hotly anticipated new single leaked across the interwebs today, and I made sure to snatch it up before the Music Police shut down every link in the joint.

The title of the track: "Your Body." Naturally, there are explicit and clean versions of the song.

Upon my first listen, I had my doubts. I cringed at the blatant, sexually-charged lyrics. The hesitant and concerned fan in me thought, Did the girl learn nothing from 2010's "Not Myself Tonight"? Then, I was informed that Max Martin was the puppet master behind this jam -- a hitmaker for the new millennium if there ever was one. Look him up if the name doesn't ring a bell (seriously, I'll wait while you do).

Then I played it again. The opening beat was, thankfully, something that didn't come off as another David Guetta/Calvin Harris/RedOne production. Then came the chorus, and it was undeniably hot; she had me at that drawn out "Oh-oh-oh-oh-oh-oh-oh-oh-oooh." Then the hard bassline kicked in, blending in with her R-rated proclamations.

I played it again. Her vocals were strong as ever, a sexed-up siren clutching to those "Dirrty" roots of hers, despite the fact she's now a 30-something divorced mom (yes, to those of us who feel like "Genie in a Bottle" only dropped a few summers ago -- we're old). I played it again; the synths sucked me in this time around.

To the youngin's out there who were too young to appreciate "Beautiful" back in the last decade, you may see her as a washed-up diva who now has to resort to critiquing hopeful singers from an oversized chair on network television. One music blogger, who shall remain nameless, insists on calling her "Floptina."

At the risk of sounding like a delusional, die-hard fan who's been blinded by love and appreciation for an artist, I say "Back off." If you want to talk about aging pop stars who are desperately reaching for a Top 40 audience, I have four letters for you: MDNA. Christina, on the other hand, at the ripe age of 32, still has enough cred to warrant legitimate, chart-topping singles.

Anyway, back to "Your Body." I played it three times in the car on the way to a lunch meeting. I played it again on the way to meet a friend for coffee. And then I played it twice at the gym while sweating off my mocha Frappucino. After hearing it up close through my earbuds, I suddenly had the desire to hear it magnified in a club. I couldn't wait for this to hit the nightlife circuit. I found myself mouthing the lyrics while pumping my legs on the elliptical machine.

I'm not saying Aguilera has a "comeback" on her hands. I'm wary of even using that word nowadays because it's become so overused that it's become trite. And the woman didn't really go anywhere (no one really ever does). However, I admit that she's clearly trying to erase everyone's memories of Bionic, the album that unfortunately became a pop casualty, falling under the shadow of all things Gaga.

That all said, I still have hope for the new album. (out November 13!)


And that's my two cents.