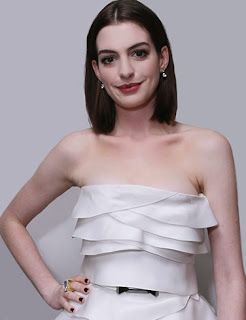 After being an active member of the blogosphere and dabbling in the occasional journalistic gig for the past 5 years, I've had my fair share of up-close shoulder brushing with celebrities (musicians, reality TV stars, and actors who don't wish to be called celebrities -- cough, Ewan McGregor, cough). Living and working in L.A. for the past decade also comes with the "hazard" of capturing famous people in their natural habitat...or in candid moments that would make their publicists cringe (ahem, Tracy Morgan, Shia LeBeouf...I'll save those for later).

However, rarely does a run-in with a Big Name leave an outstanding and positive impression on me. And since she wowed audiences as Selina Kyle in this summer's The Dark Knight Rises, I thought I'd share a little story about the fabulously talented Anne Hathaway...

In December of 2009 I was fortunate enough to co-write The Trevor Project's 12th annual Cracked Xmas show with my friend (and fellow writer) Xaque Gruber.

Cracked Xmas was a holiday-themed benefit held at the historic Wiltern Theater near the Koreatown district of Los Angeles. It is now known as Trevor Live. In 2010 it had undergone a major renovation in its production when the organization's publicity received a ginormous celebrity boost after a rash of teen suicides made headlines across the country. Soon enough, everyone wanted to be a part of Trevor's admirable work and do their part in spreading the good word about the org's preventative efforts. Global superstar Daniel Radcliffe even shot a couple of PSAs for the Project (you can check out one of them here).

The show changed venues, moving to the larger Hollywood Palladium, and the Board decided to amp up its talent roster. That included bringing in an entirely new production team, this time headed by choreographer-producer-director-SYTYCD judge Adam Shankman. Out with the old, in with the shiny new. Needless to say, Xaque and I weren't asked back. We each received a personal phone call from our producer who broke the news to us. Naturally, I was disappointed, but I understood. At least they softened the blow with tickets to the revamped production. Come and enjoy the show you weren't hired to write! That was the year Katy Perry surprised the crowd, walked out on stage, and joined Glee star Darren Criss halfway through his awesome rendition of "Teenage Dream." Fun all around. 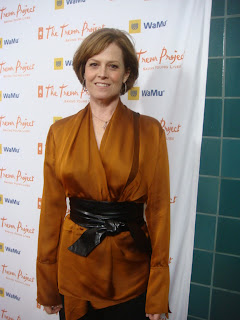 However, my first experience with the event was in 2008, and that was when I fell deeper in love and admiration with Anne.

That year's major honoree was Sigourney Weaver. She was to receive The Trevor Project's Life Award for her outstanding work, particularly for portraying real-life mother Mary Griffith in Lifetime's Prayers for Bobby. In addition to being stationed backstage with Xaque, I was pulling double duty, working the press line on the orange carpet and getting some photos and soundbites to post up on Hotter In Hollywood. There was word that Anne Hathaway was to present the award to Sigourney that night, but she was nowhere to be found before the festivities started (she may have made a quick appearance after I left the press line to get ready backstage, which would explain the above picture I found).

Towards the end of the show, as we were getting ready for Sigourney's segment, Anne showed up with her date/boyfriend/escort/whoever backstage. Even in the dimly lit space she glowed. She was in a snow-white top with a ruffled gold skirt that fit her perfectly. Actor-comedian Leslie Jordan (Will & Grace), who was standing on the sidelines, complimented her on how gorgeous she looked.

"Thank you!" she beamed. "I don't feel it. I am as sick as a dog." Turns out she was coming down with the flu, but you couldn't tell by the way she was poised.

Figuring this was my chance to have a little interaction with the actress, I stepped up and introduced myself.

"Hi, I'm Anne." The nice ones, those trained in Proper Celebrity Etiquette, will introduce themselves back to you, even though they may assume you know who they are.

"Thank you so much for doing this," I told her.

"It's my pleasure. I mean, how could I not be here? It's Sigourney frickin' Weaver! She's amazing." She was geeking out over a woman who meant so much to her. For that brief minute, Anne was a fan, pinching herself over this special moment. She then went on to praise The Trevor Project's work. None of it sounded rehearsed.

I asked her if she needed a bottle of water before she went out for her presentation. She kindly declined the offer, expressing how nervous she was. "I hope I don't mess up or cough up a lung while I'm out there," she said, sounding a little congested.

"You'll be fine," I assured her. I also wanted to add, "Because you're Anne frickin' Hathaway!"

You know how people usually describe celebrities they meet as "so nice and down-to-earth"? That's probably because they were in a public venue and had to smile for a nearby camera. Here, there was no press line. There were no cameras. There was no need to impress anyone. Ms. Hathaway was coming from a genuine place. It was easy to see she's a believer in that treat-others-as-you-would-want-to-be-treated philosophy. And after reading a couple of interviews with her and seeing her speak candidly at other events, that impression still holds up. No diva theatrics. No snobby, condescending demeanor. After chatting with her for a few minutes, I could still see the theater geek in her, that girl we all know and grew up with. 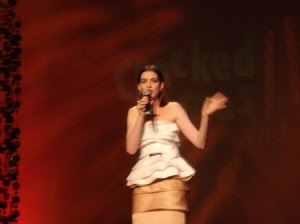 Needless to say, her presentation to Sigourney Weaver was a success. And on top of that, what Anne did next blew away the crowd. During the live auction that followed, she came out on stage to volunteer herself as an impromptu item. Let me clarify: she auctioned off herself as a drinking buddy for one night (she'd pick up the tab). Had I had $12,000 at the time, I totally would've jumped at the chance to experience a night on the town with her.

And remember: she did all of this while hopped up on cold medicine and feeling like shit. Talk about being a trooper.

Anne, it was a pleasure meeting you. Consider this a belated thank you for doing all that you do (with the exception of Bride Wars, which I'll overlook -- just kidding...maybe).

Yours truly,
The Asian Guy You Met Backstage at the Wiltern 4 Years Ago.

xaque said…
AWESOME!!!! You wrote it EXACTLY as it happened ~ she made a great impression on me that night as well that will last a lifetime.
1:53 PM

Jenn said…
My friend went to college with her and told me some stories years ago that always gave me a different impression...