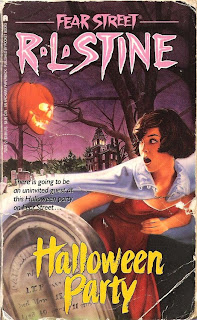 For all you youngin's out there who have their noses stuck in the pages of any novel featuring characters named Katniss, Bella, or Dumbledore, I implore you to listen to your bookworm elders and focus your attention on the literary oeuvre of R.L. Stine.

The book to your right is the eighth in a series called Fear Street. Each installment focuses on the horrific goings-on in a stateless town called Shadyside. In the fall of 1992, I happened upon this book and was introduced to its murder mysteries and supernatural mayhem when I was 12. Since then, I couldn't get enough, and I stuck with the series up until its 10-part miniseries finale in 1999 (you should see my bookshelf). I wrote about my obsession four years ago here.

Anyway, Halloween Party is about a girl who invites a particular group of her classmates to her spooky house on the titular street for a party they'll never forget. There's a dead body or two (or three) and one hell of a plot twist by the end that's reminiscent to the plot of ABC's Revenge.

And once you're done with that, check out Stine's non-Fear Street titles below. I may be a full-grown adult now, but I may just crack open one of these paperbacks tonight for the sake of 90s nostalgia. 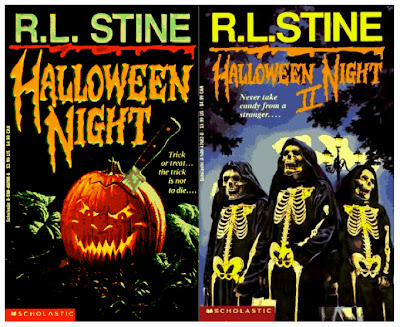