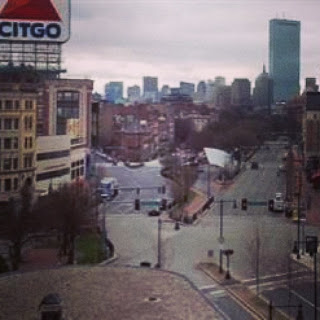 As an alumnus of Boston University, the campus I once called home never looked so eerie to me as it does in these early hours of the morning.

The crazy s**t that is unfolding today in Boston (I mean, really, there is no other way to describe it) after Monday's horrific events during the Boston Marathon is leaving me nostalgic for better days and better times spent in that city.

While America waits for more clear-cut and definitive answers and explanations, I have a few initial thoughts:

The fact that I had been up late at night watching video footage of a shootout happening on the other side of the country on my smartphone -- from the safe comforts of my bed -- is insane. It truly is amazing the kind of positive role social media sometimes play during times like these.

The fact that one of the suspects is already dead is even crazier because I had hoped we could have extracted a motive from him. However, I'm in awe of how quickly law enforcement was able to move in on these alleged criminals.

If all of these facts are true, and these suspects were indeed responsible for the bombings (remember: they're still "suspects"), then I fear that America will grow more cynical and have a harder time trusting anyone, especially former Ivy Leaguers with seemingly loving families -- like surviving suspect Sunil Tripathi, whose named was trending on Twitter like he was the next elected POTUS or something. The empath in me is feeling for his family, who had declared him missing last month, and wonders what could be going through their heads. But who really knows their history? 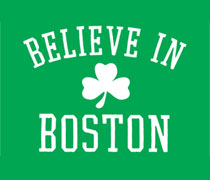 Regardless of the race or religion of the living suspect, Americans need to realize that mental health, once again, apparently played an important role in an individual's unforgivable actions. I'm sure there are other factors as well, but I hope people aren't quick to shine a spotlight on one singular scapegoat. Nothing is ever as simple as it appears.

If I were a student at BU today, what would I be doing? Sneaking outside for a few photos of empty streets? Capturing video footage of a desolate city for a film project I'd be working on at the College of Communication? Cowering in my dorm room with friends, glued to the TV?

I can only imagine while I type away and speculate and pray and hope for the best from the safety of a laptop on the other side of my country.

Benjamin said…
I can't imagine what I would be doing if I were there. I would want to be helpful and stay inside and be as safe as possible, but we live in a time where, with our smartphones, its so easy and seemingly 'helpful' to stream our experiences online. I would probably be out there snapping photos getting yelled at by police to get inside.. I am glad that people do have those instincts and I hop for their safety!
11:22 AM