The Other 'Bates Motel' Everyone Forgot 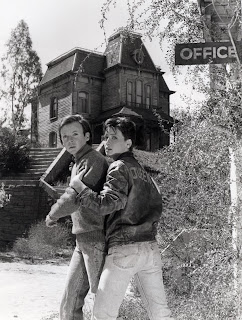 Sure, Freddie Highmore and Vera Farmiga are fine as Norman and Norma Bates on A&E's thrilling new drama, but does no one remember 1987's sad excuse for a revival starring Bud Cort and Lori Petty?

Bates Motel, the Universal-produced TV movie rightfully forgotten by the American viewing public, was also a 2-hour pilot with the intentions of bringing a new generation back to the spooky house on the hill.

In this incarnation, a troubled young man (Cort) inherits the property from the late Norman Bates and attempts to carry on the business...but creepy stuff abounds (Masked figures! Fog! Lori Petty's hair!). It all culminates in a cheesy ending that makes a Scooby-Doo denouement look like a Shakespearian climax.

I remember catching this silly production on Lifetime -- long before Jennifer Love Hewitt rubbed oil on naked men and those Army Wives started bitchslapping each other. This was a time when "television for women" consisted of rerunning treacle like this. Naturally, I loved it.