Thoughts on Thirtysomethingdom: The Birthday Blog 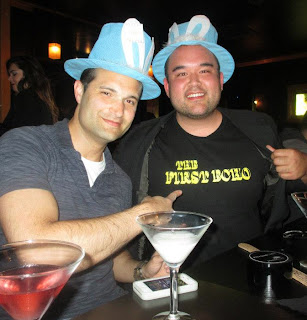 I realize this comes nearly a month after my actual birthday, March 31, the day Sandy Mitsuzuka gave birth to a 7-pound-4-ounce baby boy at New Rochelle Hospital in New York.

But better late than never.

Once again, it's a time for me to focus on the little things that pop into my head during this time of year. Here are just some of the things I've observed while I proudly embrace Thirtysomethingdom:

I cannot wait for the grand opening of the new Sprouts Farmers Market on my block; this is what now excites me.

I recently turned down an invite to a Kardashian party, opting to stay in and catch up on a couple of episodes of Smash. 2003 Me would slap 2013 Me in the face.

I've realized that I will eventually have to work alongside people who were born in the 90s...and have no idea how much of an impact Amanda Woodward has made on the decade.

The words "letting go" are frequently being used in weekly conversations with friends while discussing petty relationship dramas and trivial things we once obsessed over.

I feel like my memories of Y2K are being raped by David Guetta and his sampling of Alice Deejay's "Better Off Alone" in his new single featuring Ne-Yo and Akon.

According to modern numerology, 33 is a master number. It was also discovered to lead to the essential meaning of life in the Bible in Dan Brown's The Lost Symbol, the 2009 sequel to The DaVinci Code.

That said, here's hoping I can master my life a little more in the upcoming year.

*PS - Thanks to everyone who helped me celebrate my special day on Easter weekend. There isn't enough ink to write out all of the Thank You cards I would need.

random thought of the week the personal crap