So I Walk Into A Room Full Of Half-Naked Supermodels... 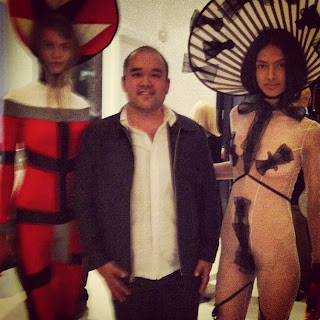 Here in Los Angeles we are in the midst of Brit Week, that time of year when UK-born artists of all types living in Southern California (and Anglophiles like myself) gather together to mingle and celebrate each other's achievements and overall fabulousness.

I was honored to be invited to attend a Brit Week party in the hills above Sunset Boulevard celebrating opera, fashion, and art (OPARTASH, get it?). Thrown at the private home of Genlux fashion editor Amanda Eliasch (pictured, below), the guest-list-only "soiree" held about 150 guests including actress Lisa Zane from -- yep -- Freddy's Dead: The Final Nightmare (I'll let that sink in for you 90s horror junkies out there). And who knew she could sing? Early in the night, the raven-haired artist slinked up next to a pink piano and performed an Italian number with opera singer Charles Eliasch. 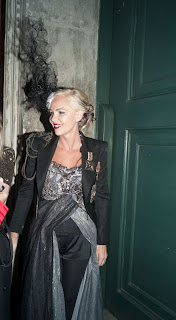 My plus-one for the evening was a filmmaker friend of mine who wished to remain nameless here because of his following description of the house: "It's as if Betsy Johnson and Ed Hardy had sex in 1987 and exploded." Indeed: white walls, onyx tables, pink velvet chaise lounges, baroque sculptures, and neon artwork made for a decor that would've done Andy Warhol proud.

Since we arrived shortly after 6pm, the actual start time, we expected to enjoy some gourmet nibblers as our dinner, but lo and behold, a dining table strewn with cheese plates and hummus wasn't enough to satiate our appetites.

After stuffing my face with brie and grapes, I searched the rest of the party for anything that would quell my stomach. No such luck. Instead, I gulped down two glasses of Veuve Clicquot and a vodka cocktail at the open bar. I then peeked my head into the kitchen where two catering staff members asked if I needed anything. I politely asked them if anything else was being served since I, like some of the guests I knew, didn't prefer to graze on pita chips and berries like farm animals.

"I know there's some pizza in the garage," one girl advised. "They're for the models. If you can find them, I'm sure they can help you. But you didn't hear that from us."

So, let me get this straight: The party guests get a snack platter from Costco while the supermodels who need to squeeze into metallic body suits for a fashion show that's happening in ten minutes get pepperoni and sausage thick-crusts?

Cut to: me on a mission, walking through partygoers, nodding my head as I was being introduced to some Duke from England and a British artist who's the son of a famous thespian (it was almost like a 21st century Downton Abbey up in there -- a mix iPhones and monocles). The whole time I'm thinking to myself, Where the hell is this magical garage hiding this mythical pizza?

I got my answer when I stumbled upon a closed door in the foyer. I turned the knob, expecting to be greeted with a closet full of jackets and hangers, and was surprised to find a dozen young ladies -- half dressed -- sitting in chairs, getting their faces painted and their hair teased. Lots of skin, lots of lingerie. Several heads turned. Through the hair spray and lip gloss, all I could smell was baked crust and melted cheese. My eyes locked on the stack of pizza boxes sitting on a table surrounded by eye creams and hairbrushes.

"Sorry," I piped in. "We were told there was pizza in here?"

"Sure," a smiling waif said, unfazed by our intrusion. "You can have this one." She got out of her chair and handed us a box. Surprisingly, most of the pizza had already been eaten. Did we just stumble upon some kind of behind-the-scenes fashion show ritual? Is this what supermodels binge on before walking the runway? Surely this doesn't happen in places like Milan or Paris...

"Don't mind us," my friend said. We awkwardly stood by the door. Smiling Waif went back to her preparations. 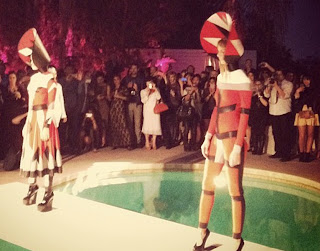 I scarfed down a slice of barbecue chicken pizza as if I were a vagabond who had just traveled across a post-apocalyptic Earth after weeks without sustenance.

Somewhat satisfied, we made our way outside to the pool deck to grab a good seat for the pending fashion show. A runway had been constructed over the pool and a spotlight had been situated next to the DJ. A hush came over the Euro-centric crowd.

Amanda Eliasch came out and tapped on a microphone, thanking everyone for coming, especially designer Pam Hogg who had flown in from London to showcase her new line of out-of-this-world outfits. Hogg, one of Gaga's fashion femme fatales, isn't known for making public appearances, so tonight's occasion was quite special and blah, blah, blah...I was just happy I had found that secret stash of pizza.

The models strutted and did their thing. I caught Smiling Waif making her way towards our seats. In a moment of recognition I smiled, nodded my head, and on behalf of my stomach, mouthed the words, "Thank you."

Without missing a beat, before she walked off the pool deck, she turned and said, "It was soooo good, right?"

My kind of supermodel.

Jenn said…
HA HA. I love that your entire night was in search of pizza. My kind of Hiko!
12:53 PM