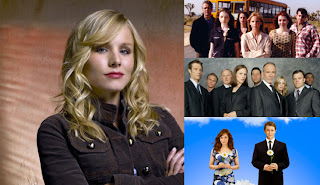 Now that the cast and creator of Veronica Mars have succeeded in reaching — and surpassing — their goal of raising a cool $2 million to produce and shoot a big-screen adaptation of the cult TV drama (with its original cast!), the inevitable is upon us: dozens and dozens of Kickstarter campaigns thinking they can raise a crapload of money and flood people’s inboxes and news feeds with donation requests. For anyone living in Los Angeles, this may sound familiar with friends who seem to work on a new independent project every other month.

This recent and growing phenomenon brings up a lot of talking points and demonstrates how powerful and influential a singular fanbase can be. It also proves that it doesn’t hurt to have a few solid connections in Tinseltown; according to some naysayers, the rate at which the Veronica Mars funds came pouring in is a little too crazy to be true.

Regardless, this slice of pop culture goodness has gotten me excited for the revival of everyone’s favorite plucky blonde detective…and has made me wonder about other TV shows that deserve a similar second chance in movie theaters.

Check out my dream list of TV shows that could use a big cinematic comeback over at ScreenPicks.
Email Post
Labels: Hiko's Hollywood hot topics movies TV