'Jurassic Park' Turns 20: A Look Back At One Of The Movies That Changed My Life 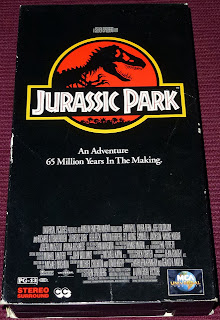 On the night before my 7th grade class trip to the Norwalk Aquarium in Connecticut, I saw a movie that would leave an impression on me for rest of my life...

June 10, 1993 was a Thursday. My mother worked late nights on Thursdays, and my 13-year-old self was determined to catch one of the preview screenings of the new Steven Spielberg blockbuster, Jurassic Park, "an adventure 65 millions years in the making." I called up my local theaters to see what showtimes were available -- remember, this was before MovieFone and those convenient movie ticket apps -- and tracked down a 10pm showing at Bay Plaza's General Cinemas in the Bronx, a swift 12-minute drive from the southern banks of New Rochelle.

With my dad away at a business dinner, I waited for my mother to come home from work, and exhausted as she might have been, she was up for taking me to the late screening on a school night. We hopped in her Pontiac 6000-LE and trekked down to the Bronx where we waited in line, nabbed some tickets, and munched on concession stand hot dogs that were probably half the price of what they go for now. And popcorn. Because what summer blockbuster event would be complete without it?

I guess I would liken my Jurassic Park experience to those who saw Star Wars for the first time in theaters back in 1977. This was the first moviegoing experience that had a profound effect on me. The moment that fearsome Tyrannosaurus Rex appeared on screen and started chowing down on the tires of that green-and-yellow Ford Explorer (with kids inside!), my heart stopped, my hands turned to ice, and my butt cheeks never clenched so tightly. 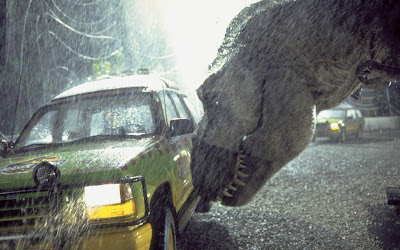 Not only was I kept in suspense, I was in awe. This was me, and millions of other moviegoers, witnessing the birth of advanced computer-generated technology in cinema perfectly blending with expert storytelling and direction. If Jaws heralded the arrival of the summer blockbuster in 1975, then Jurassic Park propelled it to new heights 18 years later, injecting it with a strong dose of adrenaline and wonderment.

Everything else conspired together to make one hell of a film. Raptor attacks! An ultra-tense game of hide-and-seek inside a kitchen! Dr. Ian Malcolm's chaos theory! Shaving cream decoys! That "one big pile of shit"! Lawyer jokes!

During the summer of '93 I was a 13-year-old obsessed. Hours of childhood fantasy scenarios were made manifest courtesy of the dream team that was Michael Crichton and Steven Spielberg. I collected the trading cards, I snatched up the comic book (hmm, I wonder how much it would go for now...), I taped the poster above my bed at sleepaway camp (another story for another time), and I purchased any entertainment magazine that featured those famous dinos on the cover (anyone remember Starlog?). Besides Titanic, it was the only film I've ever paid to see in a theater three times (c'mon, like you aren't guilty of doing the same). And I have no shame in it whatsoever.

You could also say it was a perfect storm of pop culture consumerism and the beginnings of my infatuation with pop culture itself. Jurassic Park represents the first time I became consumed by something.

When it was released on VHS the following year, I ran all the way to Woolworth's on Main Street and peered into the glass cabinet of videotapes, knowing I would get my chubby hands on a copy that was going for a then-staggering $29.95. I watched it over and over, picking up on small details I never noticed before and still feeling bad for "the fat guy who got spat on by that Dilophosaurus."

Needless to say, I plan on shelling out a now-staggering $17 to go see the 20th anniversary 3D version of the film next month.


What's truly great about this epic adventure is its sheer timelessness. Nearly every moment, every scene, is iconic in its own right. The movie balances thrills, humor, and poignant human drama in a way that's rare to find in what passes for blockbuster entertainment at the multiplex 20 years later. John Williams's score, to this day, still gives me goosebumps...and brings a tear to my eye every time that helicopter lifts off and leaves the island.

If you haven't realized it by now, Jurassic Park remains on my list of Top 10 All-Time Favorite Movies, and the above post should explain why.

It's funny. I write this weeks after riding Disneyland's Pirates of the Caribbean, which happened to break down halfway through...

Luckily no tourists were eaten.