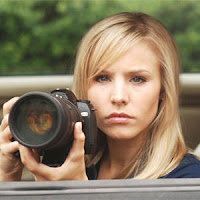 If this indeed happens, and $2 million buckaroos are indeed raised to produce this fan-fueled project, I will be one happy marshmallow. A feature-film adaptation of Veronica Mars, a cult TV show about a highly resourceful and plucky detective? With the original cast? It's possible. And for you fellow fanatics out there, if the money is raised, Warner Bros. will cover the marketing costs. If that isn't enough incentive, then slap me silly and call me Wallace Fennel (who's noticeably absent in the below presentation).