Waking Up With Daniel Radcliffe and Lena Dunham 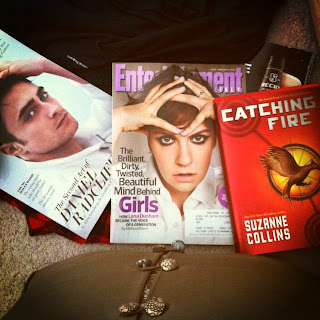 Having neglected some magazines that have been sitting on my bedroom floor, I spent my Saturday morning catching up on some celeb journalism...and attempting to start the second book in The Hunger Games trilogy before any trailers or images from the upcoming movie leak and further taint my imagination.

The Lena Dunham interview in Entertainment Weekly, written by Melissa Maerz, does a good job addressing all of the privileged-white-girl criticism Dunham immediately received after Girls premiered last year. However, the journalist in me would love to ask her, being that she's super self-aware and self-analytical, if she thinks she'll look back on her 20s when she's in her 30s and cringe at something's she said or written (this coming from a writer who's still adjusting to his 30s and is starting to notice things in hindsight). But something tells me the girl isn't a fan of regret and accepts everything as a life lesson. In other words, I'd love to go out drinking with her.

Then there's Daniel Radcliffe's Out feature in which he mainly talks about Kill Your Darlings, the Sundance indie in which he portrays Allen Ginsberg, smoking cigarettes, and -- get this -- partaking in some boy-on-boy action. The British lad is certainly on the right track to prolonging his career as an actor and earning more respect in the industry. And he's got such a good head on his small shoulders! Why can't all 22-year-old actors have his sense of respect, intelligence, and humor? In other words, I'd love to go out drinking with him. 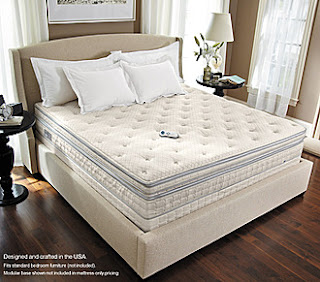 But let's talk about why I'm having such a hard time getting out of bed on this gorgeous 80-degree March morning: I'm celebrating my first week sleeping in my brand-spankin' new $4,400 Sleep Number bed.

How did an unemployed mofo like myself acquire such a luxury item? Flashback to two weeks ago: I attended a taping of The Ellen Degeneres Show in Burbank and happened to be in the lucky audience that received Ellen's latest giveaway (I would've killed to have won that trip to Australia, but I'm not complaining). I received a voucher for the Innovation Series Limited Edition bed (queen-sized), filled out some paperwork (God, I hope I'm not taxed up the ass for this freebie), and then immediately visited my local Sleep Number store to place my order. It came a week later -- in five boxes -- and I assembled the foam pads, dual air chambers, and sturdy base all by myself. With a wireless remote, I can activate the Firmness Control System to adjust each side of the mattress to my liking. Yes, it is as heavenly as it sounds. I'm thinking of changing my relationship status from "Single" to "In a Relationship With His Bed."

And if you're wondering, my number is 45.